For the man of fewer words, no gift is ever truly enough. That is the reason why you have to seek some meaningful fathers day quotes that will make your pop’s heart melt. He has been an influential figure in your life since your very first day in this world. He has been the just and simple man who wanted to make the world a better place for you. He has been your guide and mentors all these years. He is your father. To greet this man with the most amazing father's day gifts would be to fall short. After all, this man has spent his entire life trying to make you a responsible adult like him. His contributions are so impactful that a gift cannot justify them. That is why you need to express your gratitude with words that are tagged as father’s day quotes. 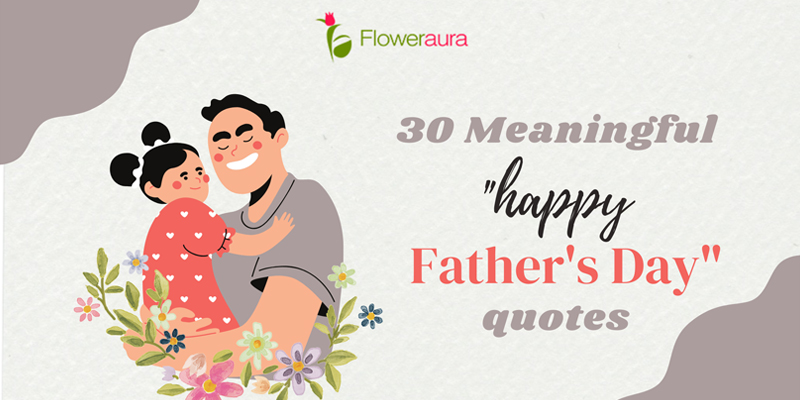 1."The heart of a father is the masterpiece of nature" — Antoine François Prévost

2.“The best fathers have the softest, sweetest hearts, in other words, great dads are real marshmallows.” — Richelle E. Goodrich

3."When you're young, you think your dad is superman. Then you grow up, and you realize he's just a regular guy who wears a cape." — Dave Attell

5."Dads are amazing people. They can turn problems into opportunities and ordinary days into memories that stay with us a lifetime." — Catherine Pulsifer

7."A father is someone you look up to no matter how tall you grow." — Unknown

8."When my father didn't have my hand, he had my back." — Linda Poindexter

9."Dads are most ordinary men turned by love into heroes, adventurers, storytellers, and singers of song." — Unknown

10."No man I ever met was my father's equal, and i never loved any other man as much." — Hedy Lamarr

Father’s Day Quotes To Write In A Greeting Card

11."My father didn’t tell me how to live. He lived, and let me watch him do it." — Clarence Budington Kelland

12."An almost perfect relationship with his father was the earthly root of all his wisdom." — C.S. Lewis

13.“To her, the name of father was another name for love.” — Fanny Fern

14."A father is the one friend upon whom we can always rely.” — Emile Gaboriau

15."Some people don't believe in heroes, but they haven't met my dad." — Unknown

16."Daddies don't just love their children every now and then, it's a love without end." — George Strait

17.“I believe that what we become depends on what our fathers teach us at odd moments, when they aren’t trying to teach us. We are formed by little scraps of wisdom.” — Umberto Eco

18.“The heart of a father is the masterpiece of nature.” — Antoine François Prévost

19.“A father is neither an anchor to hold us back nor a sail to take us there, but a guiding light whose love shows us the way.” — Unknown

20."Every father should remember one day his son will follow his example, not his advice." — Charles Kettering

21."My father gave me the greatest gift anyone could give another person: he believed in me." — Jim Valvano

22."To be as good as our fathers we must be better, imitation is not discipleship." — Wendell Phillips

23."The best thing about being a dad? Well, i think it's just the thing that every man wants - to have a son and heir. — George Best

24.“The power of a dad in a child’s life is unmatched.” — Justin Ricklefs

25.“One father is more than a hundred schoolmasters.” — George Herbert

26.“A father is the one friend upon whom we can always rely. In the hour of need, when all else fails, we remember him upon whose knees we sat when children, and who soothed our sorrows; and even though he may be unable to assist us, his mere presence serves to comfort and strengthen us.” — Émile Gaboriau

27."Any man can be a father but it takes someone special to be a dad.” - Anne Geddes

28. “By the time a man realizes that maybe his father was right, he usually has a son who think he’s wrong.” - Charles Wadsmorth

30. “Any fool can have a child. That doesn’t make you a father. It’s the courage to raise a child that makes you a father.” - Barack Obama

Add the following father’s day quotes to the father's day greeting cards online and hand them over to him along with the gift of your choice to make your father's special day all the more memorable.