Dhanteras 2022: Significance & Why is it Celebrated 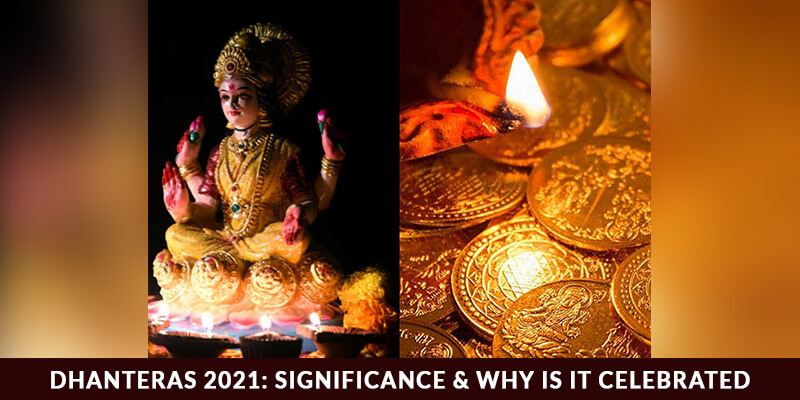 On the day of Dhanteras, people get up early and take bath as soon as sunrise. After completing the morning rituals, they prepare for Lakshmi Puja in the evening. People light lamps and diyas in the evening and also decorate their homes on the day of Dhanteras. They light incense sticks, distribute sweets and flowers to Goddess Lakshmi and family members gather to worship. People also worship Lord Kubera on this day to double the benefits and blessings.

Various rituals are performed on the auspicious occasion of Dhanteras and all these rituals have different meanings but usually they are related to wealth and prosperity. It is believed that worshiping Goddess Lakshmi brings wealth to the family. Oil lamps are lit around the house which is believed to ward off evil. On the day of Dhanteras, people bring new things into the house which may include; Gold or silver coins, jewelry and new utensils.

Why is Dhanteras celebrated?

According to the popular legend of Samudra Manthan, Goddess Lakshmi emerged from the ocean during the churning of the ocean on the day of Dhantrayodashi. Hence this is also the reason that Goddess Lakshmi is worshiped on Trayodashi.

We are all well aware of the churning of the ocean, where Lord Vishnu carrying the Kurma or tortoise avatar carried the Mandar mountain on his back. With the help of Vasuki, the sea was churned by the serpent-tailed devas and the asuras placed the snake's mouth in front of them and released poisonous venom. On churning the ocean, many things came out of it, such as Parijat tree, Moon, Paras stone, Kamdenu, Iravati, Halahal (poison consumed by Lord Shiva), Goddess Lakshmi and Dhanvantari who is known as the God of Medicine, by whose names. Dhanteras is celebrated. This is another reason why Dhanteras is celebrated.

It was believed that King Hima's 16-year-old son was predicted to die of a snake bite on the fourth day of his marriage. However, as soon as the new bride came to know about this, she piled her jewelry at the entrance of the room and kept her husband awake all night singing and telling stories.

When Lord Yama went to see King Hima's son in the form of a snake to bite him, he became blind on seeing the shiny metal, and instead sat down on the heap to listen to the new daughter-in-law's tales. As Yama remembered the time fixed for the boy's death, he walked away peacefully and the prince was saved, leading to the celebration of Dhanteras.

This auspicious day comes on the thirteenth day in the month of Karthika. This festival is celebrated two days before the Diwali celebration. This year Dhanteras will be celebrated on Sunday, 23rd October 2022.

Things to buy on the auspicious occasion of Dhanteras

Dhanteras is considered to be an auspicious day to invest money and things like gold and silver. This auspicious day tends to have significance for businessmen as several rituals are performed for the enhancement of work and wealth. Generally, most of the people tend to buy jewellery, new vehicle, new utensils for the kitchen, home appliances etc. However, people also donate home utensils to people in order to attract good fortune. Markets can be seen flooded with numerous items that were purchased on this special day. You can buy gold jewellery on Dhanteras or gift them to your close ones. Vedic astrology also suggests that buying gold is very auspicious on Dhanteras.

Dhanteras is much more apart from the financial richness. The spiritual richness and the togetherness of loved ones is also a major aspect of this festival. Dhanteras is a major Hindu festival, and it has significance in the overall celebrations of Diwali. The main festival of Diwali is incomplete without Dhanteras, which marks a prosperous and joyous beginning to one of the most important festivals of India. Convey your warm wishes to your family and friends by sending Dhanteras gifts online. There are websites offering a wide range of gifts online. Happy Dhanteras!