Egg-Free Baking – Which Egg Alternative Is The Best Substitute For Cake Recipes?

Eggs are amazingly healthy and versatile when it comes to their usage. Also, when it comes to baking, almost every recipe calls for eggs as they contribute to the overall structure, colour, flavour, and consistency of the baked goods. In today’s world, a lot of people are going towards being vegan. Egg allergy is the second most common food allergy in the world for kids, which leaves no choice for the bakers than to find a substitute for eggs in their cake recipes. 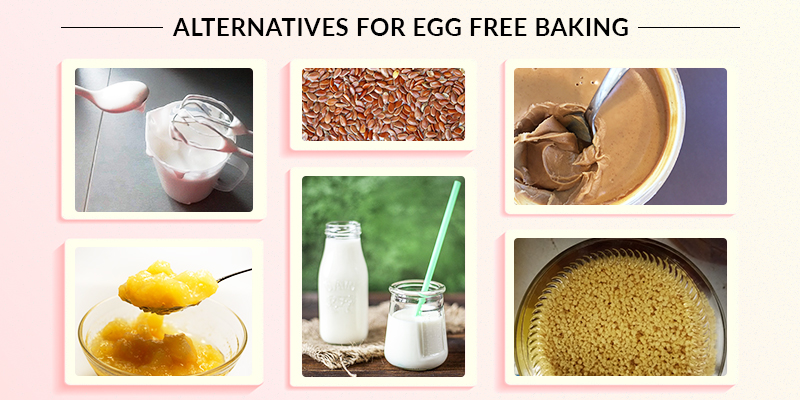 Here is a list of egg alternatives which are as good as eggs and can be used while baking cakes:

The puree from cooked apples is known as Apple Sauce. It is the most preferred replacement for an egg as the apple sauce is usually sweet and little or no extra sugar and sweetener is required to be used in the recipe. One can use 65gms of apple sauce to replace one egg.

Flax Seeds and Chia Seeds are tiny, highly nutritious seeds. Both of the seeds, when used as a replacement for an egg, make the recipe dense and heavy. A lot of bakers prefer to use Flax and Chia Seeds as they enhance the flavour of the cake to a nuttier flavour. 7gms of the seeds mixed in 45gms of water can replace one egg.

Nut butter of peanut, cashews and almond butter are sometimes used as a replacement for eggs in cakes. They enhance the flavour of the finished cake by making it taste nutty. Some bakers prefer to use the nut butter in brownies, pancakes, and cookies too. For replacement of one egg, 60gms of nut butter is used.

Carbonated water acts as an excellent replacement for an egg in the recipes where the final eggless cake has to be light and fluffy. Carbonated water adds moisture to the cake and also traps the air bubbles which make the cake feathery. One can replace one egg with 60gms of carbonated water.

Aquafaba is the thick residue left from cooking beans. It has a very similar consistency to that of an egg white. Be it the home-baked cakes, cakes from bakeries or the convenient cakes that are ordered by cake delivery websites, everywhere it is used in recipes where there is a specific requirement of egg whites. One can use 45gms of Aquafaba to replace 1 egg.

Some egg alternatives make the final product heavy and dense while some make it light and fluffy. Try your own alternative from the above list and find the best replacement of eggs for your recipe.