Rakshabandhan represents the bond of love that exists between brothers and sisters. It is also a symbol of the responsibility that brothers have to protect their sisters throughout their lives. Interestingly, the ancient roots of the festival of Rakhi hold great importance. People are always interested in knowing interesting facts about things that excite them. Today, we have brought interesting facts about Raksha Bandhan that you may not know about. So, keep on reading about all the amazing Raksha Bandhan facts and calm your curiosity! 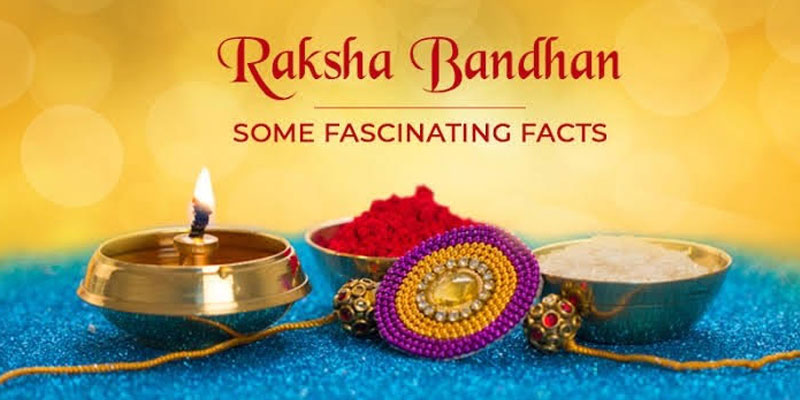 1. Raksha Bandhan is also known nationwide as "Rakhi Poornima", or "Rakhi", or "Rakhri". Most people like to say Raksha Bandhan. 2. The thread that the sister ties on her brother's wrist are very auspicious. The thread denotes the 'Bandhan' part in Raksha Bandhan. It stands for a two-part bond and is a symbol of protection or 'Raksha', which the younger sister wants from her brother. 3. The sacred thread of the Rakhi is not just tied by sisters to their brothers. In some areas of India, like Uttar Pradesh, Rakhi is tied by a sister to her sister-in-law as well. These Rakhis are called Lumba Rakhis. Also, the sisters who have sisters tie rakhi to each other. The same goes only for the sibling couple. 4. Another one of the interesting fact about Raksha Bandhan that not a lot of people are aware of is- Raksha Bandhan falls on the last day of Shravan, so the devotees pay their respects to Lord Vishnu by praying at sea, keeping in mind the 'Nariyal' or coconut. Since Maharashtra is a coastal region, Raksha Bandhan day is also known as Naryal Purnima day there. They have their own customs, which the people of Maharashtra follow in their own way. 5. According to Hindu mythology, Indrani, the wife of Lord Indra, tied a thread around his wrist when he was going to fight the demons. Also, the importance of the relationship changed, and the sister tied a thread to her brother's wrist. 6. Very few people know the full story behind this fact. According to this legend, Lord Krishna once cut off his hand while flying a kite. Seeing this, Draupadi immediately tore a piece of cloth from her sari and tied it to Krishna. In return, Lord Krishna promised to protect Draupadi under any circumstances. Later, Lord Krishna protected Draupadi during her Cheer Haran. 7. In Haryana, the state announces free bus rides for women a day before the festival and on the festival day so that they can go to their brother's house and celebrate the festival. Not only this, a male adult of eighteen years of age or less is also allowed a free ride along with the woman. 8. It is believed that Lord Vishnu gave a boon to the demon king Bali, that he would stay in his palace, but Goddess Lakshmi did not want to do so. He tied a rakhi to Bali and asked him to let Lord Vishnu go in return. 9. The festival of Rakhi is celebrated in USA, Sri Lanka, Nepal, Mauritius, and the UAE due to its beautiful nature of representing a universal bond between sisters and brothers. 10. It is mainly celebrated by Hindus and Jains in India and around the world. Nevertheless, it is also jointly organised by other religions, including Muslims, Sikhs, Buddhists, and Christians. 11. Nobel prize winner Rabindranath Tagore used the festival Raksha Bandhan to maintain peace and harmony between Hindus and the Muslim community during the 1905, Partition of Bengal.

These were some amazing facts about Raksha Bandhan that we couldn't help sharing with you! Today online shopping portals not only help in getting rakhi and gifts in different parts of India but also from your homes or offices, with just a few clicks. And you can also choose from several designs of Rakhi threads, Rakhi with chocolate, a combo of sweets, and exciting online Rakhi gifts for sister and brother.