The Mesmerizing Story Behind Raksha Bandhan

India is the land of festivals. Every two or three months we have a big celebration coming up with all thanks to our rich cultural diversity. It is beyond beautiful to watch people belonging to different religions bond beautifully over commonly-celebrated festivals of India. Amongst many such instances, the festival of Raksha Bandhan is one. Mainly belonging to the northern states of India, Raksha Bandhan is celebrated with a lot of vigor. You must know how people celebrate the lovely festival of Raksha Bandhan but you might not be aware of the pious story behind Raksha Bandhan. It is for this reason that we recited it for you. 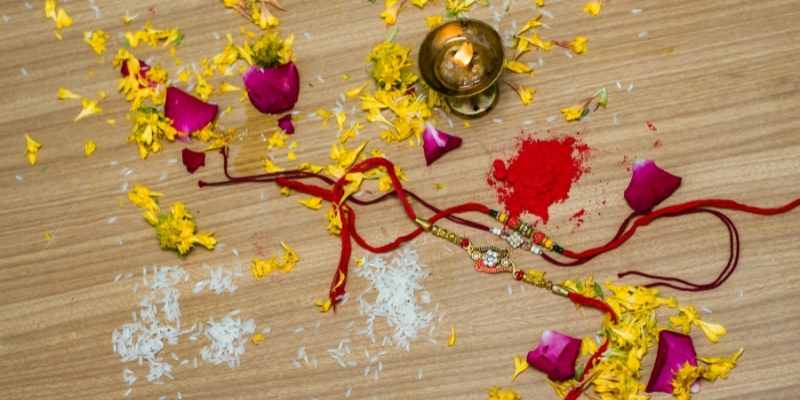 The roots of Raksha Bandhan

Hindu mythology is the proud home of Raksha Bandhan. This is where it all began. The oldest mention of Raksha Bandhan is in the holy Mahabharata which is a sacred book of the Hindus. When Lord Krishna inadvertently hurt himself, his wrist bled. Draupadi, the wife of the Pandavas, was an ardent devotee of Lord Krishna. She couldn't bear to look at Lord Krishna's bleeding wrist. So, she tore a piece of cloth from her saree (the traditional garment of Indian women) and tied it on Lord Krishna's wrist to stop the blood from dripping. It was at that moment that a sacred bond between Draupadi and Lord Krishna was established. It was the bond of a sister and her brother. From that day on, a special day was dedicated to the celebration of the beautiful relationship that brothers and sisters share with each other. It came to be known as Raksha Bandhan. The story of Raksha Bandhan is truly a marvelous one.

The literal and symbolic meaning of Raksha Bandhan

Raksha Bandhan is made up of two words - Raksha and Bandhan. Raksha means protection and Bandhan means bond. So, the literal meaning of Raksha Bandhan is "a bond of protection". Sisters pray for the long life and happiness of their brothers and tie a sacred thread called Rakhi on the wrists of their brothers to protect them from all sorts of evil influences. In return, brothers touch the feet of their sisters to gain blessings from them and promise to protect their sisters at all times. Brothers also offer a gift to their sisters as a token of their love and education. The festival of Rakshabandhan is all about wishing the best for your siblings and promising to stick up for them in times of need. So, that's everything that the previous Raksha Bandhan story was all about.

When is Raksha Bandhan celebrated

In the month of Shravana according to the Hindu calendar which usually falls around July or August of the English calendar, a full moon takes place. It is on this day that Raksha Bandhan is celebrated. The markets are decorated a couple of weeks in advance as sisters look for the prettiest rakhi for their brothers and brothers come in search of the best rakhi gift for brother.