All living beings survive on water and so do the plants. While the human body consists of around 70% water, plants contain around 90%. Plants get their water needs completed through rains, but rains aren’t enough as there is no fixed time and a fixed amount of water. Plants require water to grow perfectly, and India is a country substantially dependent on farming. And that’s why we are discussing different types of irrigation in India. 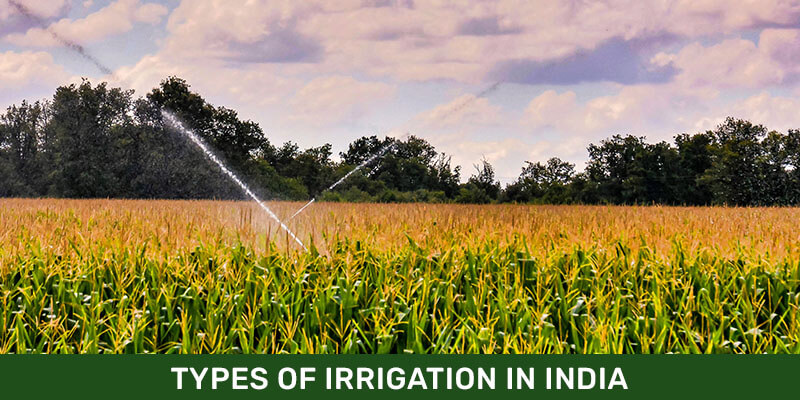 In simple words, providing the crops and fulfilling their water needs through ways other than the rains is known as irrigation. Frequency, rate, time, and amount of water irrigation vary from crop to crop. The irrigation system in India is largely dependent on water sources like rivers, dams, wells, ponds, canals, and tube wells.

1. Surface Irrigation - As the name suggests, surface irrigation involves no use of pumps. It is one of the first irrigation methods as it only requires mastering the art of flowing water from a natural or manmade source to the crops.

2. Localized Irrigation - The word localized refers to smaller sections of a crop field. In the localized irrigation system, the water is distributed to the corps through a well-planned piped network.

3. Drip Irrigation - Drip irrigation is one of the most water-efficient types of irrigation in India. As the name suggests, the water is provided just to the roots of the crop, drop by drop. This irrigation system requires more maintenance.

4. Centre Pivot Irrigation - Centre Pivot is a form of sprinkler irrigation. The sprinkler system moves in a circular motion and is provided with the water from the pivot point at the centre of the arc. Many pivots today also gesture GPS devices.

5. Sub Irrigation - Sub-irrigation is one of the irrigation methods helpful for Indian farmers farming in areas with high water tables. Through a system of pumping stations, gates, ditches and canals, water is distributed by artificially raising the water tables while allowing the soil to be moisturized below the root zone of plants.

6. Manual Irrigation - It is a highly labour intensive and time-consuming irrigation system in India. It involves manual watering using hoses, nozzles, and sprinklers. It can save many but requires more time.


What Is The Importance Of The Irrigation System In India?

- Low rainfall throughout the year or a particular season can adversely affect the productivity of the crops. Irrigation helps in providing sufficient water hence increasing productivity.

- Proper use of irrigation helps a farmer grow multi crops in a single field.

- Higher productivity of the crops means higher income for the farmers.

- Irrigation systems have helped the output of the crops, which lets the nation export the crops and bring in the foreign currency.


What Are Different Irrigation Methods?


Being a plant lover, you can pick a traditional method if you have bought online plants for your indoor space.