Often, it is said that New year is about new beginnings! A fresh start that is purely accompanied by new resolutions that compel people to take vague oaths, make bizarre promises, and on top label everything as ‘New me’. However, this new philosophy isn’t able to keep the ‘old me’ away who wants to party like there’s no tomorrow. Long before, the Santa rings his jingle bells or the midnight countdown begins, this wild animal wakes up and calls everybody in the contact list and conjures a full-proof plan for the new years party. Long before anything else could happen, the room is full of craziness and of course, your friends are either enjoying the new beginning or are acting dumb rolling on the floor. 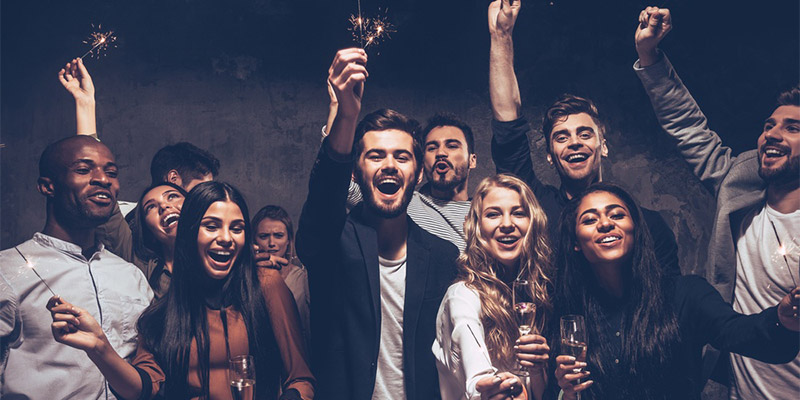 You might have been to innumerable new year parties but what remains the same is the unique type of buddies acting all same. The following list will take you on a stroll to all the types and even give you the ‘Oh! Now That’s me’ moment, not sure in the middle or in the end.

Blessed with the intellect of Socrates, this person out of nowhere preaches everybody of the various ways of the world they aren’t aware of. This person has always been a part of the group until the fuel kicked him to make everybody understand how the number of bottles is directly proportional to the gain of intellect. So, bottoms up is the solution to all tiny or big problems.

We all have that one friend that had enough and is now full of boastful things about the coming year. Thinking that one night will turn his years of habits into something good, will give him powers to achieve heights, and let’s not forget to make him realize he needs to do something about his laziness.

While many of us go reckless, to some of us life is still a gentle reminder of living and thus, instead of booze, they find happiness in the virgin mojitos and duly take the responsibility of getting home safe and sound. Kudos to such brave patient souls!

He has been a loner, solely taking responsibility for his feelings, and to him, this new year night is the night for the downpour of feelings. He wants to let every brother, friend, even to his dog know how much they mean to him.

Basically, many of us are well aware of our capacities till the crazy hits in and this person showers every bit of emotions and food he had back a few hours. Not just this, they reign goes overboard when they begin to talk to the pillars and splash water on the bins thinking the bin is thirsty and needs to be fed.

No matter if there’s a Tsunami hit with an earthquake of 7 on the Richter scale, this gang knows how to make their way from the stormy waters and keep the party going. They are unconquerable and their souls need to just party and party.

Crying their hearts out for their ex, sharing the past breakups, the new year party has one or two weepers that have more booze in their eyes than in their hand. Life has been hard to them and their crazy seems to be uncontrollable during this time.

After all, what’s new year party without eye candies? Young and wild, they are the eye treats for everybody! They keep the buzzing among the people on and maintain the heat required to keep the party going.

Unable to keep the calm and senses together, the selfie taker selects out all the infinite filters and thinks of the poses he/she needs tonight. You might think it is over by one or two clicks but hey guess what don’t try to take that camera away, you might wake the angry demon up.

It is like they are breathing the new year every minute. People around are eating, dancing, and are indulging in other merry-making activities, but the reporter has all its eyes set on the clock and there’s no damn battery that can’t stop him/her from ticking the countdown on time.

High on the energy proteins and steroids, the excited one grooves endlessly and this person might even transfer the same to you if you come in contact with him/her. They are the ones that keep the party alive and because of their high spirits, they gel perfectly with the Unstoppables.

Running into brawls, fist fighting, they are the angry souls scuffling wild in the open with a warning message written on their forehead as not to mess with their wrath as they are the true messies. Like the strong headed Achilles, they will understand no Diomedes, Hector, and can signal the beginning of Trojan war any time.

Incapable to stand on their own, these are the true representatives of the new year's party. Completely wasted, they are the reason ‘sloshed’, ‘trashed’, ‘hammered’ began to have existed in the new year's dictionary.

The appetizers are not even over and you find your friend comforting himself with a drink on a bean bag near the window. Taken as another form of chatting, drunk texting is a really common habit among boozehounds. A simple way to curse their exes, throw tantrums on friends, the texters are the silent yellers that find knows all the answers of the questions not asked.

To some people, the new year is all about to get together, nursing their bellies, and filling their hearts with smiles and gifts. Responsibly taking care of themselves, they raise a toast and go back home or stay overnight taking care of others.