Everyone wants their lives to be colourful, but why not their cakes, right? Bakers all around the world got such requests years ago since we ever thought about it. And so the baking industry went through a long, elaborate revolution to bring the concept of colours in the world of cakes. Bless those bakers who fought for such a variety of colourful cakes that exists today. Lately, many such colourful cakes have been trending but mostly in their eggless or vegan cake variants.

One such colourful cake is the vegan funfetti cake. It does not just look delightful but tastes even better. People often keep looking for online birthday cake, and vegan funfetti cake seems quite popular. It seems to have become a trend as fruit cakes are for Christmas, so are funfetti cakes for birthdays. So here’s an easy vegan funfetti cake recipe - just to delight you. Make sure to give this eggless funfetti cake a try at baking on someone’s birthday - we bet they are going to love it to the core. Without much ado, let’s get into the details.

• Start by preheating your oven at 350 degrees F.

• Pour some oil, soy milk, apple cider vinegar and vanilla into this batter. Now take a large spoon and mix all the ingredients together.

• Make sure you don’t overmix the batter. Further, fold ½ cup of sprinkles into the batter.

• And bake the batter for about 30-35 minutes until when a toothpick pricked comes out clean.

• Let the cakes cool down for about 10 minutes or so before you start frosting up. Place them into the cooling rack after taking them out from the oven.

• Your vegan funfetti birthday cake is ready to impress the birthday boy/girl. Dig in! 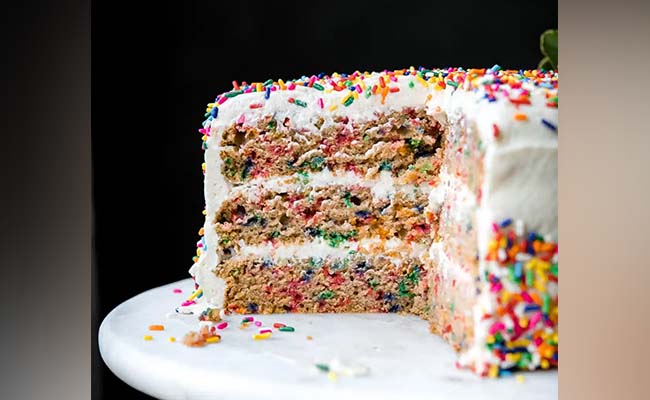 So, now that you have given this recipe a read, don’t you think it is one of the best vegan cakes recipe? We, too, think so! So, when are you plan to bake this masterpiece for your loved ones, with or without any special reason?