Cakes are love! No matter what shape, size or flavour they come in, we love it all. Any celebration, event, and the occasion are incomplete without a cake cutting. This delicious delight is made from eggs, sugar, flour, oil, milk and butter. 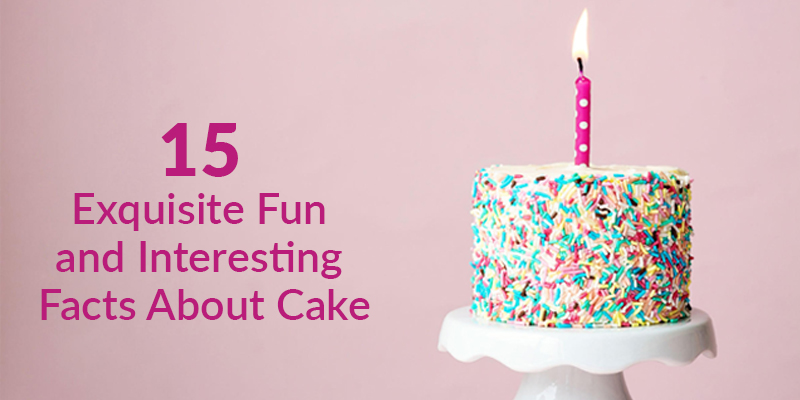 A little bit of history and statistics that we are certain will amuse cake lovers. The internet is full of amazing facts and we have done a little bit of research just for you! Though this delight is very common in all cultures, there are many fun facts about cakes that are unknown to most of you. Let’s have a look at them:

● The National cake day is celebrated on November 26th.

● The word ‘cake’ originated from the Middle English ‘kake’. It is also related to some English word called pastry and tart.

● In middle ages, the word cake once equated to a hard-baked (both sides) round of bread which was flat.

● Red Velvet Cake Recipe was an act of revenge - one of the interesting cake facts about Red Velvet is that this recipe was known to the public for revenge. A lady ate a red velvet cake in the restaurant and liked it quite a lot. She asked the restaurant for the recipe and they charged $ 100 for the same. She became enraged and widely circulated the recipe for revenge.

● In ancient America, a cake was not something they would enjoy eating. Many people believed that keeping a fruit cake under the pillow would get you a handsome husband.

● Patrick Bertoletti “deep dish” a competitive eater from Chicago made a world record in 2012 for eating 72 cupcakes in six minutes.

● Ever Heard of “royal icing”? It is a simple icing made from softly beaten egg whites, icing sugar, and sometimes lemon juice. It gained the recognition 'Royal' when it was used to coat & decorate Queen Victoria's wedding cake in 1840. Queen Victoria was one of the first to have pure white icing on her wedding cake. That’s why it’s called “royal icing.”

● Google declared the fastest-growing recipe search is for cupcakes, a testament to the continuing popularity of this irresistible treat.

● The first known wedding cakes were actually of bread.

● The first birthday cake was originally a cake that was given as offerings on a person's birthday.

● One of the world's largest birthday cakes was made for Las Vegas' centennial birthday. To celebrate, a cake was made weighing 6.18 tons. It is almost the weight of an African elephant!

● From the word cake, a dance form was originated know as ‘cakewalk’. It is originated by the African American. It’s a dance competition where the cake is awarded to the winner.

● Do you know that the world's tallest cake made by some school members in Jakarta is 108 feet, 3 inches high? The world's most expensive cake was "Pirates Fantasy" worth about $ 35 million.

Now that you are aware of so many interesting facts about cake, you would want to eat it more and more. Include in yours or send cake to your loved ones on their special occasion and wish them a delicious wish.