Does Caffeine Affect Plant Growth - Know All from Here

"A garden requires patient labour and attention. Plants do not grow merely to satisfy ambitions or to fulfil good intentions. They thrive because someone expended effort on them."


It’s not that easy to nurture a garden as people think of it. Every plant needs to be nurtured with the same kind of love that a mother pours in her child’s upbringing. One needs to know what all a plant needs, what all are harmful to its growth and what may shorten its life expectancy. From looking after the flowers of some flowering plants to ensuring it grows to its fullest plant growth potential, one needs to take care of it all. Watering, repotting, sunlight, soil and other such requirements need to be taken care of these plants to bless us with its blissful effects. 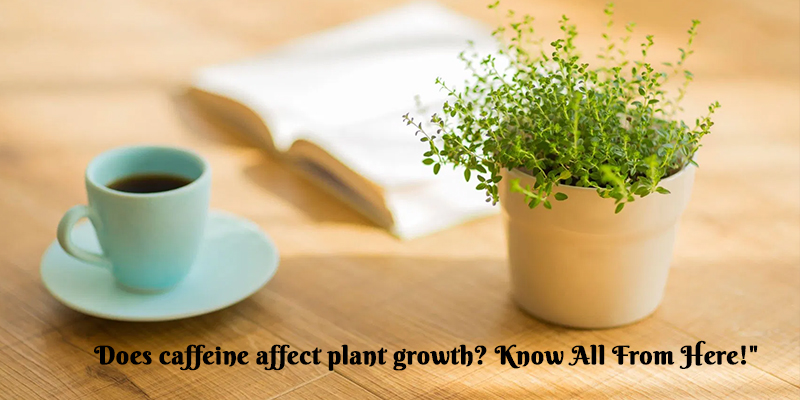 One such underrated requirement is that of fertilising a plant. People often end up saving their Lil bundle of sunshine from pests which is why they end up losing them to death. Every year, plants require specific nutrients from the soil which soils don’t cultivate or magically restock on their own. Rather, we need to fill them up with these nutrients for our plants to do well.No new fact that proper application of fertiliser can make all of the difference in your harvest, which is why every plant needs its nutrients in the form of some organic or chemical fertilisers. Plants need nitrogen, phosphorus, potassium, calcium, magnesium and sulfur in different capacities through their fertilisers.

Talking out fertilizers and their uses, most of us wouldn’t know the caffeine effect on plants. Yes, the caffeine which our morning coffee and chocolates contain. Scientists and researchers are quite intrigued to find out the effect of caffeine on plant growth. It is said that caffeine when added directly to the garden soil or as compost it instantly improves the quality of the soil. From containing 2% nitrogen by volume and further breaking down to release more nitrogen, caffeine affects plant growth optimistically. If we pay much attention to the part of breaking down and then proceed, we can make it absolutely a great organic fertilizer. As un-composted coffee grounds may actually result in stunted growth of the plants, it is better to make use of it to add them to the compost bin and allow the microbes to break them down. So, caffeine will affect plant growth for sure, but it depends on the usage - will it be a positive or a negative one.


Quite just like in humans, caffeine is said to affect the plants by acting as a chemical stimulant. It is said to increase the biological processes in plants, as well. Traces have been found when caffeine is added to the soil, the process of photosynthesis tends to speeden up and so does the process of absorption of water and nutrients from the soil. It affects the ph level in the soil and makes the soil acidic in nature which seems to be detrimental for some plants. Also, researchers have proved that using caffeine in plants can initially result in showing stable cell growth rates but begin to kill these cells, later on, eventually leading the plant die or resulting in stunted growth.

Not many of us know that caffeine acts as an insect repellent, as well. It is said to kill slugs and snails from your garden. Other than these insects, it also kills mosquito larvae, hornworms, milkweed bugs, and butterfly larvae. As caffeine when added in plants suppresses the enzymes in the insects’ nervous systems and interferes with its food consumption and reproduction, eventually leading to killing it. Surprisingly, it is also said high doses of caffeine are toxic to insects as and when insects approach a coffee plant to seek the nectar of coffee blossoms. The aroma of coffee beans is what attracts or traps the insects when they come close to such sweet nectar, they end up falling trap into caffeine’s toxicity. But insects these days are turning into the smart ones, their taste receptors which have helped them evolve comes in handy to identify plants with caffeine and to avoid them.


Lastly, caffeine-filled grounds are said to be rich in potassium which results in attracting earthworms, every garden’s best friend. Also, the nitrogen release is an added advantage, which increases the plant growth and introduces the plant to its other much needed fellow nutrients.