Home
>
Blog
>
How Over Mixing Affects The Cake
>

How Over Mixing Affects The Cake

Since time immemorial, cakes have been an inseparable part of celebrations. From the times of our forefathers till present, no celebratory occasion has culminated into a successful one without fighting for the last piece of a fluffy, moist cake. Be it birthdays, wedding anniversaries, a get-together party, a cake has to be there. Period! 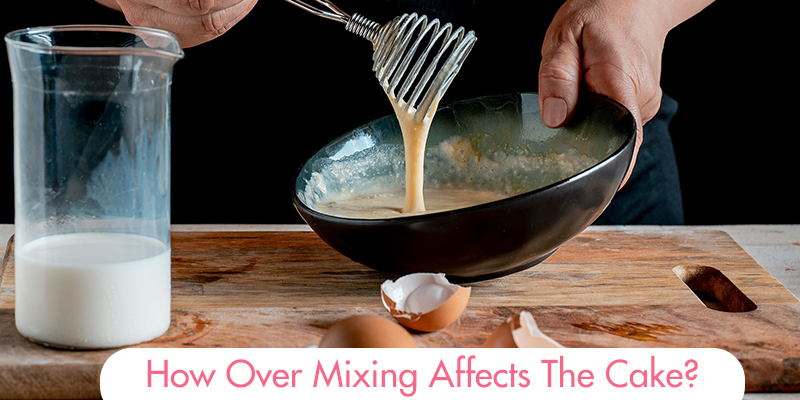 Over the years, cakes have become another synonymous of sheer joy and pleasure. And cake cutting ceremonies have become a customary ritual and tradition of every celebratory event. It would not be wrong to say that cakes are the main drawcard; thus alluring people to parties and events. And why wouldn't be? Savouring a freshly baked cake with buttercream icing and fondant decoratives is an ineffable experience. A feeling that extends beyond happiness.

Although, online cakes are available in different varieties and flavours that anyone can devour whenever their heart and soul craves for something sweet. From designer cakes to photo cakes to tier cakes, there are a lot of options available at one’s fingertips. However, some like to bake love at home. It is said, “Baking is an art.” We say it is the truest form of art that requires passion, baking ingredients, bakeware, and adherence to rules and regulations.

Every art is governed by certain principles that act as a stepping stone to creating a masterpiece. There are rules of drawing. Likewise, there are fundamentals of baking. If you religiously follow the fundamentals of baking while preparing a cake, no natural force can stop you from bringing to everyone’s taste buds a cake that is an edible piece of love and pleasure.

“Baking can often be referred to as the chemistry of cooking. All ingredients must be accurately measured, and measurement is critical.” Measuring is not the tough part of the cake baking job; cake mixing is.

Well, many bakers aren’t aware of the rules of the most common cake mixing method. After every cake baking session, some bakers often question themselves: same ingredients, same ingredient measurement, same baking procedure, same baking tools; then why isn't my cake pretty to look and tasty to eat? It is because of either undermixing or overmixing. The latter being a common mistake.

Yes, how you mix your cake ingredients has a direct impact on the texture and taste of the cake. This is why professional bakers swear by cake mixing techniques. Great bakers know the art of mixing ingredients that distinguishes them from the bakers.

If till now you haven’t given a thought to cake over mixing effects, now is the time to. All the cake recipes come with a disclaimer “Mix until combined,” which means that they stop mixing as soon as the ingredients you added aren’t visible to your eyes.

This is what happens after over-mixing: The Baking Red Alert!

The gluten in the flour forms elastic gluten strands on overmixing, thus giving to the cake a flaky crust. A major problem faced by bakers. Flour-- the main ingredient in the cake baking process contains two proteins, gliadin and glutenin. They react with liquids and form gluten strands-- which provides structure in cakes. But, overmixing gives rise to a toughened gluten strand that is responsible for a flat, chewy texture--this is not desirable in cakes. As cakes should be soft and tender.

Longer-mixing time also affects the appearance of the cake. The more you mix, the less brown cake you get to eat. Overmixing is also the reason for flat cakes. Yes, an extended mixing time allows for more reaction of leavening agents, reducing the expansion of air pockets that don’t allow the cake to rise; hence a flat cake.

Relish a fluffy, brown, soft cake by restraining from over mixing. Okay, got all your answers to your cake over mixing questions. It’s time to implement these strategies and techniques for baking like a pro.