Do you remember Republic Day celebrations from your school days? Well, we guess you do. How can anyone forget the Flag Hoisting Time on Republic Day which filled our heart with patriotism and make our eyes gleamed with pride? One dare not! 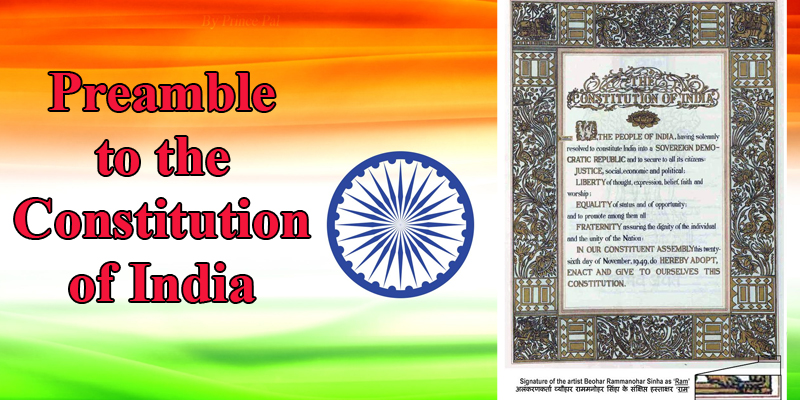 The unfurling of the National flag was accompanied by the national anthem and pledge over narrations of the Preamble. This was followed by patriotic speeches, cultural programs, prize distribution.

As we all celebrate 71th Republic Day on 26th January 2020, let’s reiterate in our heart and mind the preamble-- The Introduction to the Indian Constitution.

In the words of Dr. B.R. Ambedkar-- one of the architects of the Indian constitution, “Preamble is a way of life which recognizes liberty, equality, fraternity as the principles of life and which cannot be divorced from each other.”

WE, THE PEOPLE OF INDIA, having solemnly resolved to constitute India into a SOVEREIGN SOCIALIST SECULAR DEMOCRATIC REPUBLIC and to secure to all its citizens:

EQUALITY of status and opportunity;

and to promote among them all

FRATERNITY assuring the dignity of the individual and the unity and integrity of the Nation;

IN OUR CONSTITUENT ASSEMBLY this twenty-sixth day of November 1949, do HEREBY ADOPT, ENACT AND GIVE OURSELVES THIS CONSTITUTION.

The significance of the Preamble lies in its components.

On 26th January 1950, the constitution of India came into effect, on which Republic Day is celebrated. However, if you are asking, why do we celebrate republic day? This day marks India’s transition towards being an Independent nation; hence the day needs to be celebrated with full patriotism and honor.

Explaining the keywords in the Preamble:

Sovereign: The word “Sovereign” means India is an independent nation and the Legislature Of Indian has the power to enact laws in the country.

Socialist: The word “Socialist” was added to the Preamble by the 42nd Constitutional Amendment in 1976. Socialism means the achievement of socialist ends through democratic ways.

Secular: The term “Secular” means that all religions that equal respect, protection, and support from the state.

Democratic:“Democratic” indicates the Constitution established a form of government which is by the people, for the people, and of the people.

Republic: In a Republic state, the head of the state is elected either directly or indirectly by the people.

Equality: The word “Equality” provides equal status and opportunities to all the citizens and people of the country.

Fraternity: “Fraternity” means a feeling of brotherhood. The Preamble urges the people to assure the dignity of the individual and unity, the integrity of the nation.