Decades ago, the Water Hyacinth (Eichhornia crassipes) spread from its native ecosystem to Amazonia, Brazil, and became an invasive species in water bodies around the world. It also reached India and has since eaten into many lakes in India, such as Katraj Lake in Pune, Pichola Lake in Udaipur and Ulsoor Lake in Bangalore.
Species of hyacinth comprise the genus Eichhornia. With broad, thick, glossy, oval leaves, hyacinth can rise up to 1 meter above the surface of the water. The leaves are 10–20 cm wide and float above the surface of the water. Hyacinth is also one of the favourite plants to be included in an aquatic garden. However, in addition to its ability to add beauty to your water garden, it actually comes with lots of benefits. Today blog is all about uses of Water Hyacinth plant i.e Eichhornia 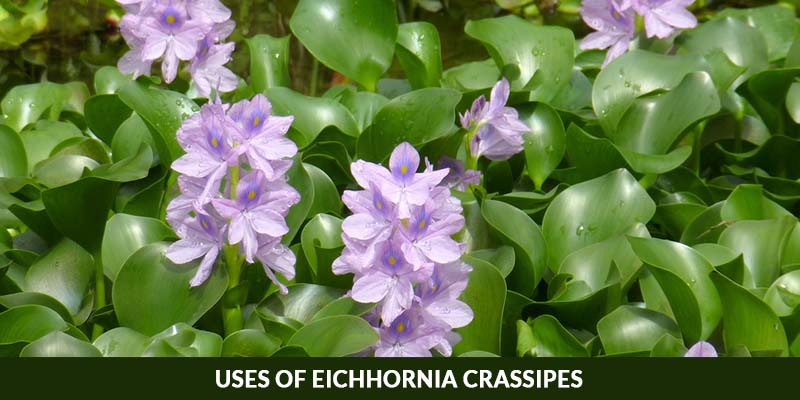 Scientists and researchers are always on the lookout for new fibre sources and better methods of sustainable processing. The goal is to provide an all-natural and preferably organic fibrous material that can be used in the textile industry for use in clothing, interiors and upholstery. Hyacinth fabric is not yet available in local stores or markets but keeps your eyes open for this innovative step in sustainable apparel technology.

Hyacinth plays a very important role in pollution mitigation by absorbing various types of pollutants including heavy metals present in water. This plant has been used for pre-treatment in a drinking water treatment plant. Hyacinth can absorb minerals and inorganic substances from sewage. It can be grown rapidly in all types of conditions. As a result, after it is used to clean sewage it is brought in for use as an organic fertilizer such as compost or mulching. Hyacinth can absorb suspended particles, algae, dissolved impurities, nitrogen, phosphorus and other nutrients. It has been used in advanced water treatment in sewage and in the treatment of hospital wastewater.

Many skincare products contain hyacinth. The use of water hyacinth and its antimicrobial, antifungal, antibacterial properties make it a perfect choice for treating many skin related problems.

People in the Philippines like to use hyacinth as an anti-inflammatory agent. It can be included as one of the list of herbal plants found in the Philippines. They make juice from hyacinth, mix it with lemon juice which is rich in vitamin C, and then apply it topically to the boil. As a result, it relieves inflammation and reduces abscess.

Women can actually use this plant to get a healthy body! In Kenya, some women use this water Hyacinth plant to promote lactation. A new mother can consume boiled hyacinth to get the most out of it. On the other hand, its flowers can help women suffering from irregular periods

Hyacinth beans should never be eaten raw. Raw Eichhornia beans are considered toxic and can cause stomach problems. Therefore, it is advisable to boil the dried hyacinth seeds so that the poison inside is released and is safe for consumption. Also, be sure to change the water used for boiling. This will further help in flushing out the toxic content of the beans.