Royalty has always fetched a great no. of people towards itself. And after the hyped social media platforms, and the famous hashtags like- #weddinggoals #cakegoals #couplegoals and many more, have made every couple go mad. Though the cake-cutting ceremony was never the part of Indian wedding culture, with the introduction of such magnificent-looking cakes, everyone hunts to have the best and unique one at their wedding. And not just weddings, many websites are selling anniversary cakes online to make your d-day anniversary special celebrations, a Lil more extravagant.

Let us explore some royal wedding cakes that our Indian celebs have added in their weddings #makingcouplegoals. All the cakes mentioned below can be inspiration cakes for your wedding or maybe someone close to you. Also, the list below is in no particular order, so enjoy reading and planning what will your wedding cake be like. 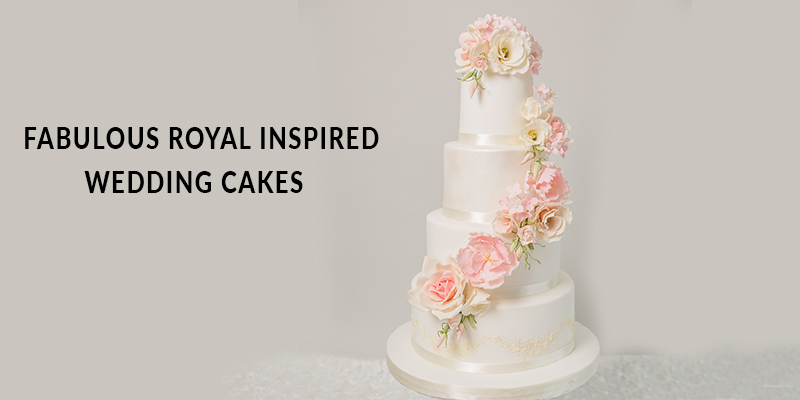 One of the most hyped weddings of the year 2018 was of the International singing sensation Nick Jonas and former Miss Universe Priyanka Chopra. Their wedding was not just about two families coming together; in fact, it was the unison of Indian culture with the English one as Piggy Chops was seen performing all Hindu wedding rituals followed by English rituals. And not to forget, the cake- a piece of marvelousness and everything pretty. The cake was 18 feet long and was prepared by Nick’s chefs.

Another no-less than royalty was the wedding of Anand Ahuja and Sonam Kapoor Ahuja. The London-based industrialist and the Bollywood actress was known for keeping their relationship undercover. They had a full-fat Indian wedding, and both the counterparts are Punjabi, so what else can you expect? And talking about the cake, well they had a couple of cakes, but the best one they had was by Pooja Dhingra. The cake was a six-tier cake, and every layer was as classy and sassy, as Sonam is. 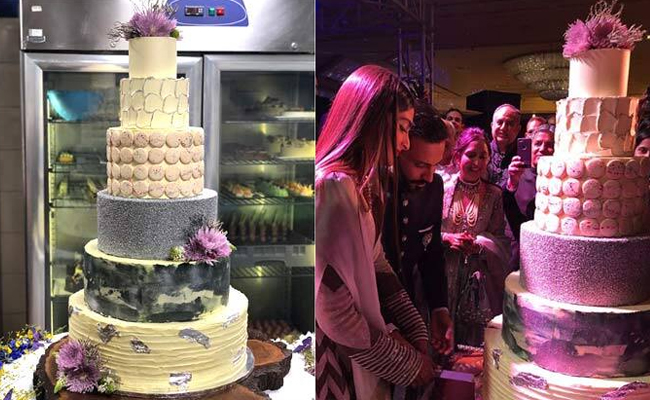 The long-time couple was in the news for their chemistry in varied horror movies. The couple tied the knot in the year 2016. They had a very subtle yet memorable wedding ceremony. Being a Bengali, Bipasha went to tie the knot as per Bengali culture and was visibly happy with her other half. The cake cutting ceremony happened at their reception in Mumbai. The cake was designed by Bunty Mahajan, the Le Cordon Bleu-trained chef. The cake was a four-tier cake and was topped with two little monkeys, as they call themselves. 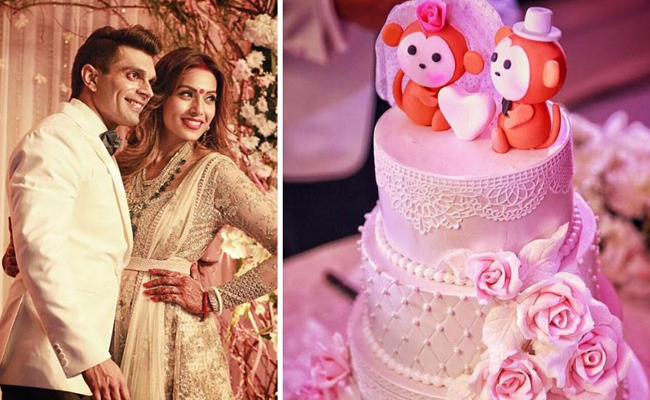 One of Bollywood’s most talked marriage was of chocolatey boy Shahid Kapoor and Mira Rajput. The later is a commoner from Delhi and was profoundly lucky to get married to this Bollywood heart-throb. They got married in the year 2015 in Punjabi manner in a Gurudwara in Delhi itself. The cake they choose for their wedding was baked by Rasleen Kochar and was a three-tier cake, made with subtle colours. 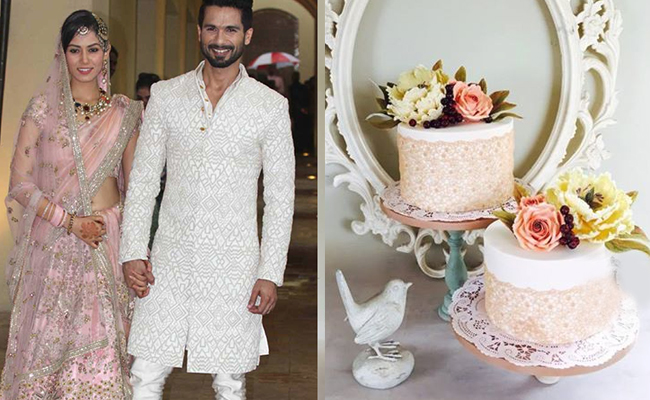 Let us have a look at what you can pick for your wedding to make it more memorable and happening. Here is a small list of some quirky wedding cakes that if added in your wedding celebrations will make up for some #cakegoals.

Well, not a long time it has been when these cakes came into existence. The list of these cakes is to top up any two or three-tier cake; a fondant made figurine of the wedding couple. More the details to make these figurines, the more is the fun to have these cakes at your wedding. 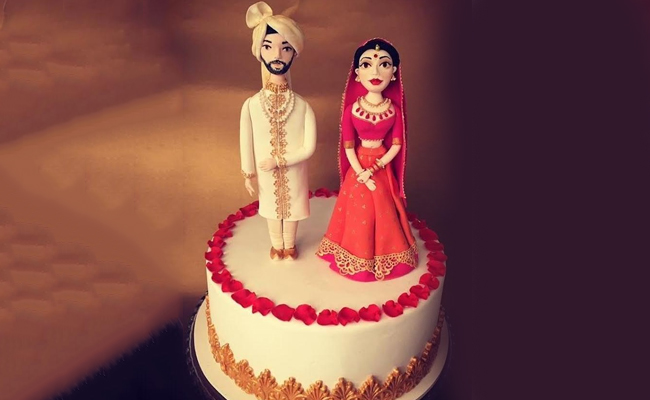 Another royal looking cake is this one, which can be made as royal as your budget allows. The best part about this cake is one can pleasingly see a glimpse of what the bride's and the groom's clothes be like, precisely the embroidery. This cake looks surreal if made using the richest colour combination like maroons and royal blue, emerald greens, blood red, and more. 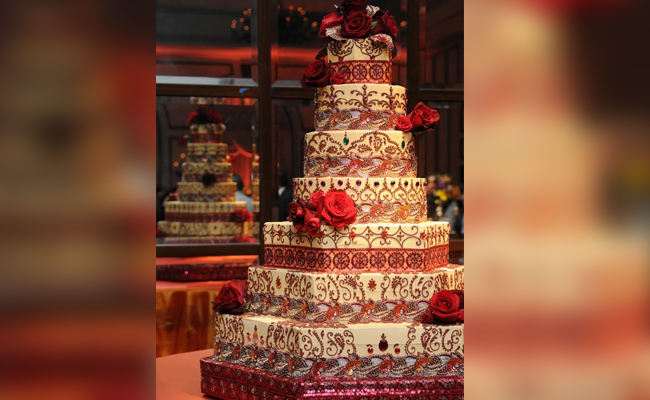 You can consider this type of cake, a close relative to the Fabric Cakes. Lace cakes look pretty in two to three tiers, with every tier in the shade of an ombre. And on these tiers, there are intricate hand-made lace-like designs, made by using pipings of glittery frosting. This cake has another level of fan-following, and we promise your guests would be left spell-bound during your cake-cutting ceremony. 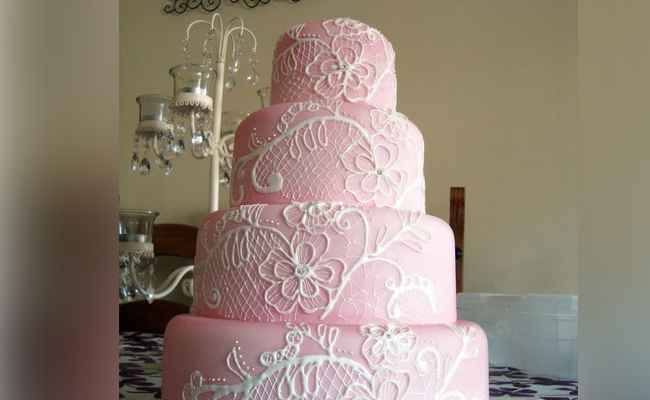 Seems tempting? Well, they are. These royal cakes are not just a beauty to the eyes, but we promise you they are equally enticing to the taste buds. And now that you have a list full of wedding cakes don't scroll any more and make your choice super quick and buy cakes online . We promise you a great time at your wedding with such cakes.