From the very childhood days to the elderly days, there would be absolutely no one who doesn’t like the chocolate as a flavour, be it in their ice cream or cake. Giving a head to head competition to the most valued flavour, cocoa flavour makes it also irresistible with its unique sensory and melt-in-the-mouth feature to say no to.

But, only a few people will only know the actual difference between the flavour and texture profile of these two. Having the same source of origination i.e. the cacao tree, chocolate and cocoa are processed differently to be termed as the two different by-products of this tree.

While cocoa beans are processed in a way, in which little or even no cocoa butter is left, chocolate is processed quite in the same manner but without removing the cocoa butter. 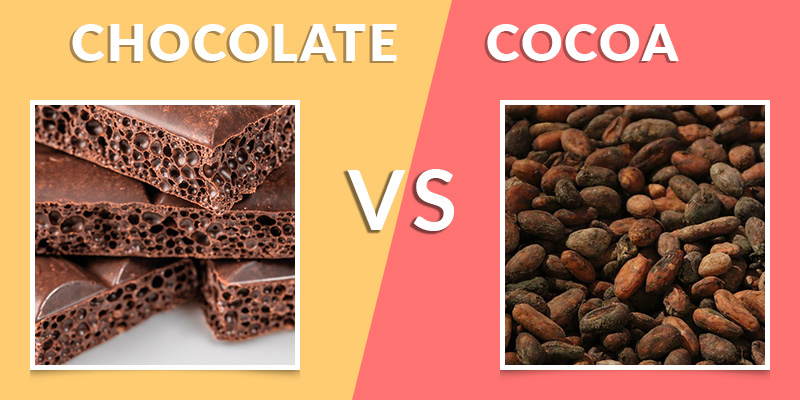 These cacao beans go through a 4 stage of processing i.e fermentation, roasting, shelling and grounding. Due to the removal of cocoa butter, natural cocoa seems to be dark and bitter in taste much more than the chocolate flavour. Also, the colour of these two by-products to even get effected due to removal/non-removal of cocoa butter. According to the colour palette, cocoa tends to have a colour somewhere between moderate to reddish-brown, while the colour of the chocolate tends to differ from medium to dark brown.

As per science, cocoa seems to be a healthier option when compared with chocolate in terms of crediting to gaining fewer calories, sugar and being full of antioxidants. Cocoa is also said to be good for curing heart-related diseases, lowering blood pressure, helping diabetes patients, improves metabolism, has anti-inflammatory effects and provides neuroprotection. In chocolate’s category, dark chocolate seems to have quite some benefits to your health.

Dark chocolates are said to be a great source of fibre, iron, magnesium, copper, and manganese. It is also said to raise the HDL and aims to protect LDL from getting oxidised. Also, the flavanols present in the dark chocolates are said to improve your blood flow and gives you the protection of the sun. The most commonly heard benefit of good quality chocolate is that it tends to release happy hormones like serotonin, dopamine, and endorphins which makes a happy, cheerful person. So, next time when you feel low, grab a bite of chocolate to say goodbye to those morose moments.

On the other hand, chocolate no doubt is much sweeter than cocoa, but accounts to high fat and sugar content Cocoa as a word has been derived from the Spanish word “cacao”. While “Chocolate” as a word has also been derived from the Spanish word “xocolati”, which means bitter water. As per historical sayings, it was considered by Aztecs to be a ceremonial drink served as a food to the Lord. No doubt, it is still treated to one of the most desired luxury goods/ flavour, all across of globe.

So, clearly both of these by-products seems much tempting yet convincing to win this flavour battle. We cannot choose anyone to be the winner, as both of these flavours are extremely wanted and relished by everyone. Also, both of these has a separate set of health benefits, responsible for the cure of various health factors. Coming to the flavour game, every person has their own set of preferences. Some would prefer rather the sweet taste of chocolate whereas, some others would prefer the strong yet bitter, raw taste of the cocoa. So, clearly, we cannot choose any one of these!

What we can do is savour these flavour to the core across its various preparations. Could n’t agree more with me, right?