On the day of Raksha Bandhan, special attention is paid to the brothers. The whole day is full of fun and full of happiness. Houses are cleaned and sisters take an early bath and wait for their brothers to get ready so that they can tie the sacred thread of Rakhi to their sisters. After tying Rakhi on the wrist of their beloved brother, brothers also present gifts to their sisters. 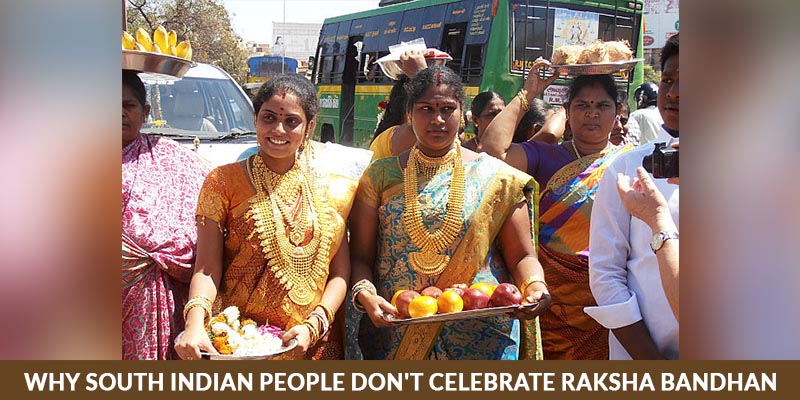 However, now the festival is not restricted to any particular religion; On this day, people of almost all religions tie protection threads on the wrists of their brothers and sisters.

South Indians generally ignore 'Raksha Bandhan', a predominantly North Indian festival that glorifies fraternal ties. The 'rakhi' that adorns most Hindu wrists in many parts of the country is distinctive because of its absence in the four southern states, although some families, with a 'northern influence', follow the practice. However, it must be acknowledged that the number of South Indian families 'Raksha Bandhan' today is more than ever before.

The absence of Raksha Bandhan does not mean that the sister-brother bond is absent. The people of Tamil Nadu may feel that what applies in their own state may actually reflect in the whole of the South, which is not the case at all, and yes, Karnataka and Telugu states have some similar cultural ties... but here's the thing. That most Telugu people will not tie Rakhi on Nag Panchami as described by some Kannadigas... Maybe not even 1% who follow that tradition and Rakshasa in Telugu states (especially Telangana) Rakhi is celebrated as Rakhi Purnima and is as good as one can find the best celebration in the state. In most families, daughters also tie rakhi to the father. it is a tradition that women in the house tie rakhi to their favorite god before tying brothers and fathers!!

It is one of the important festivals of Telangana. In fact, the distribution of sweets during Rakhi is as grand as it is during Diwali and Bathukamma (Dussehra) festivals!!

They say, the Raksha Bandhan festival is celebrated as Avani Avittam in South India. On this day, Brahmins change the heavenly string called Janeu, which they wear after taking a holy dip. The change in the janeu is representative of atonement, a penance for all past sins, and a mahāsankalpa, a resolution to move forward with the existence of goodness, honor, and dignity. The great Yajurveda text is also started by scholars on this day.

In fact, it is glorified throughout history, on the silver screen, and even in modern society. South Indians measure the spirit on several occasions, the most outstanding of which is Diwali. There is no real evidence for such expression of sister-brother love in the teachings of ancient epics and Indian holy books. The vow by Draupadi (the wife of the Pandavas) to accept Lord Krishna as her brother and protect him at all times is described as a sacred bond between brothers and sisters.

It was customary for a brother to officially invite his sister/s home (again it was a custom for all sons to live under one roof with their parents) to celebrate Diwali.

So, this is how South Indians celebrate Raksha Bandhan. No matter which part of the country you belong to, it's all about togetherness and loving your loved ones. Happy celebrations!